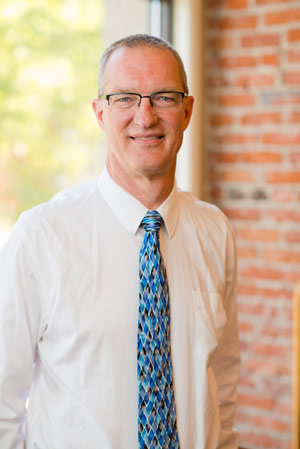 Thomas (Tom) P. Aufdemberge, MS, DABR, MRSE has enjoyed 27 years with MPC. Prior to coming to MPC, he had taught middle school science for three years before earning his MS in Physics from Eastern Michigan University in 1990.

Tom’s initial work experience in medical physics was as an X-ray Inspector for the State of Michigan. Four years after starting with MPC (as soon as he was eligible), he earned ABR certification in Diagnostic Radiological Physics. At MPC, he quickly became instrumental in developing the computer software templates that our physicists use to efficiently and accurately calculate shielding requirements, fetal doses, and to report our results of CT, MRI, and FFDM testing for the ACR and the Joint Commission. Tom’s teaching experience was utilized as he became our primary trainer of our growing ranks of x-ray physicists, as well as teaching fundamental imaging physics to radiologist residents at Oakwood and St. Joseph – Pontiac Hospitals.

Starting in 1997, he was one of our first physicists to work in Wisconsin, then moved his family from Michigan to Wisconsin, becoming Vice-President of WI operations (just himself) in 2002. He now leads a team of 6 full-time physicists and one professional affiliate. Being in WI afforded him the opportunity to teach the MTMI Initial Digital Mammography for Technologists course and the similar course for Bellin College of Radiologic Technologists.

More recently, Tom has additionally taken on being a part-time in-house physicist (made possible with the great depth of support from fellow MPC physicists) for a major Milwaukee area health care system, while initiating MPC’s CT protocol review/optimization program. Also, Tom passed the demanding MRI Safety Expert exam, hence the new acronym (MRSE) in his signature. This developed skill allows him to confidently provide advice to our clients in all aspects of MRI safety.